For PACE 2021, we offer the following three tracks:

You can participate in any subset of the three tracks. In each tack we use this input format.

Your submission should find an optimal cluster editing (a set of edge modifications that turns the input graph into a cluster graph; see also the problem description) within 30 minutes. We expect your submission to be an exact algorithm, although we do not ask you to provide a proof of it. If for some instance your program returns a solution that is not optimal within the time limit, your submission will be disqualified. Moreover, if the output of your program for any instance turns out to be not a cluster editing, your submission will be disqualified as well. See also the input format and output format.

Ranking method: You will be ranked by the number of solved instances. In case of a tie, the winner is determined by the time required to solve all instances.

Your submission should find a cluster editing (a set of edge modifications that turns the input graph into a cluster graph; see also the problem description) within 10 minutes. See also the input format and output format.

Termination: Your program will receive the Unix signal SIGTERM on timeout. When your process receives this signal, it must immediately print the current best solution to the standard output and then halt. You can find examples how to handle SIGTERM in several popular programming languages. If the process blocks for too long, say 30 seconds after the initial SIGTERM signal, we will forcefully stop it with SIGKILL.

Our goal for this track is to develop efficient and effective preprocessing software that can be combined with exact or heuristic algorithms (see also discussion). Your submission should return a smaller “equivalent instance” to the one given as input within 5 minutes. Moreover, your submission should contain a “solution-lifting algorithm” that efficiently computes a solution for the input graph given a (not necessarily optimal) solution for the equivalent instance constructed by your submission.

More precisely, for an input graph $G$, your submission has to return a number $d$ and a graph $G’$ such that $\mathrm{opt}(G) = \mathrm{opt}(G’) + d$, where $\mathrm{opt}(H)$ denotes the minimum number of edge modifications to required to turn $H$ into a cluster graph (cf. see also the problem description) for the graph $H$.

Output Format: The first line contains a single number $d$. The following lines contain the output graph $G’ = (V’, E’)$, which has be given in the same way as the input, i.e., the second line contains p cep followed by the number $n$ of vertices and $m$ edges (separated by a whitespace) and the subsequent $m$ lines contain a list of edges where each line consists of two integers in the range $1$ to $n$. See the input format for the details. Then, $S_1, \dots S_4$ must be given in this order. The first line for $S_i$ contains $|S_i|$. For the following $|S_i|$ lines are in the form i j followed by the new line character \n, where i j represents an edge modification. Here is a dummy example.

Final submission: In the source code referred in the submission to EasyChair, the output should only contain the first $|E’| + 2$ lines, i.e. the lines for $S_1, \dots S_4$ should be excluded. Your output may contain comment lines, starting with the character c. Note that a “solution-lifting algorithm” must be included as well. Your “solution-lifting algorithm” gets as input the input graph, the output of your kernelization, and a heuristic solution $S’$ for the kernel and needs to compute a solution $S$ for the input graph with $|S| \le |S’| + d$. The format of $S$ and $S’$ does not include the respective size (unlike in the optil.io variant), instead we use the format as specified in Output Format for Exact Track and Heuristic Track.

The input graph is given via the standard input, which follows the DIMACS-like .gr file format described below.

Lines are separated by the character \n. Each line that starts with the character c is considered to be a comment line. The first non-comment line must be a line starting with p followed by the problem descriptor cep and the number of vertices n and edges m (separated by a single space each time). No other line may start with p. Every other line represents an edge, and must consist of two decimal integers from 1 to n separated by a space; moreover, graphs are considered to be undirected. Multiple edges and loops are forbidden. For example, a path with four edges can be defined as follows:

Every line must in the form i j followed by the new line character \n, where i j represents an edge modification. Here’s some example:

Use this to verify whether the output is a cluster editing. To compile this verifier for Cluster Editing execute make all in the command line. Afterwards, there is an executable verifier. The verifier takes two arguments: paths to an input graph file and a solution file containing a list of edges. It checks whether the graph is a cluster graph after the edge modifications in the solution file are made. Note that it does not check for optimality. 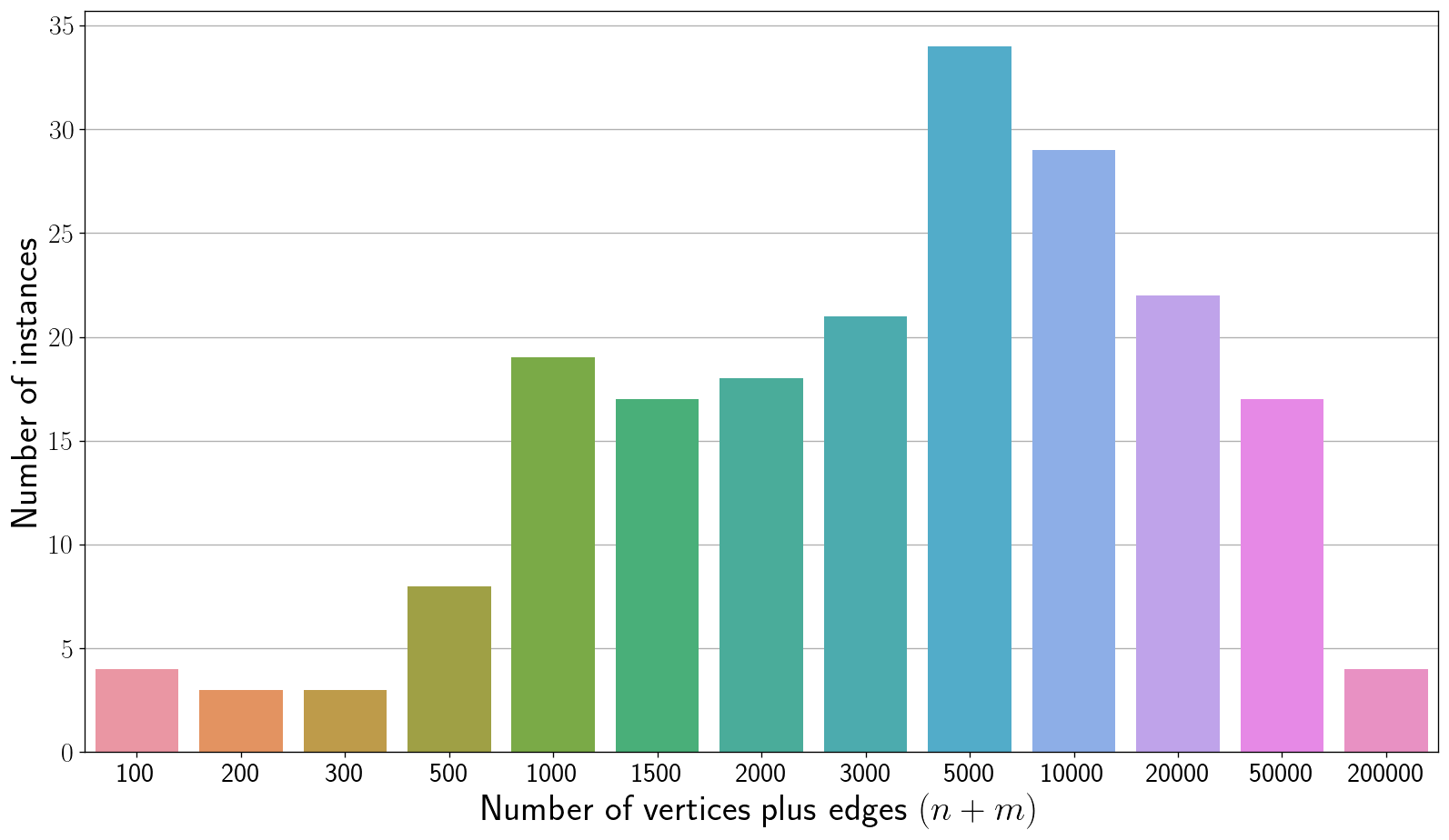 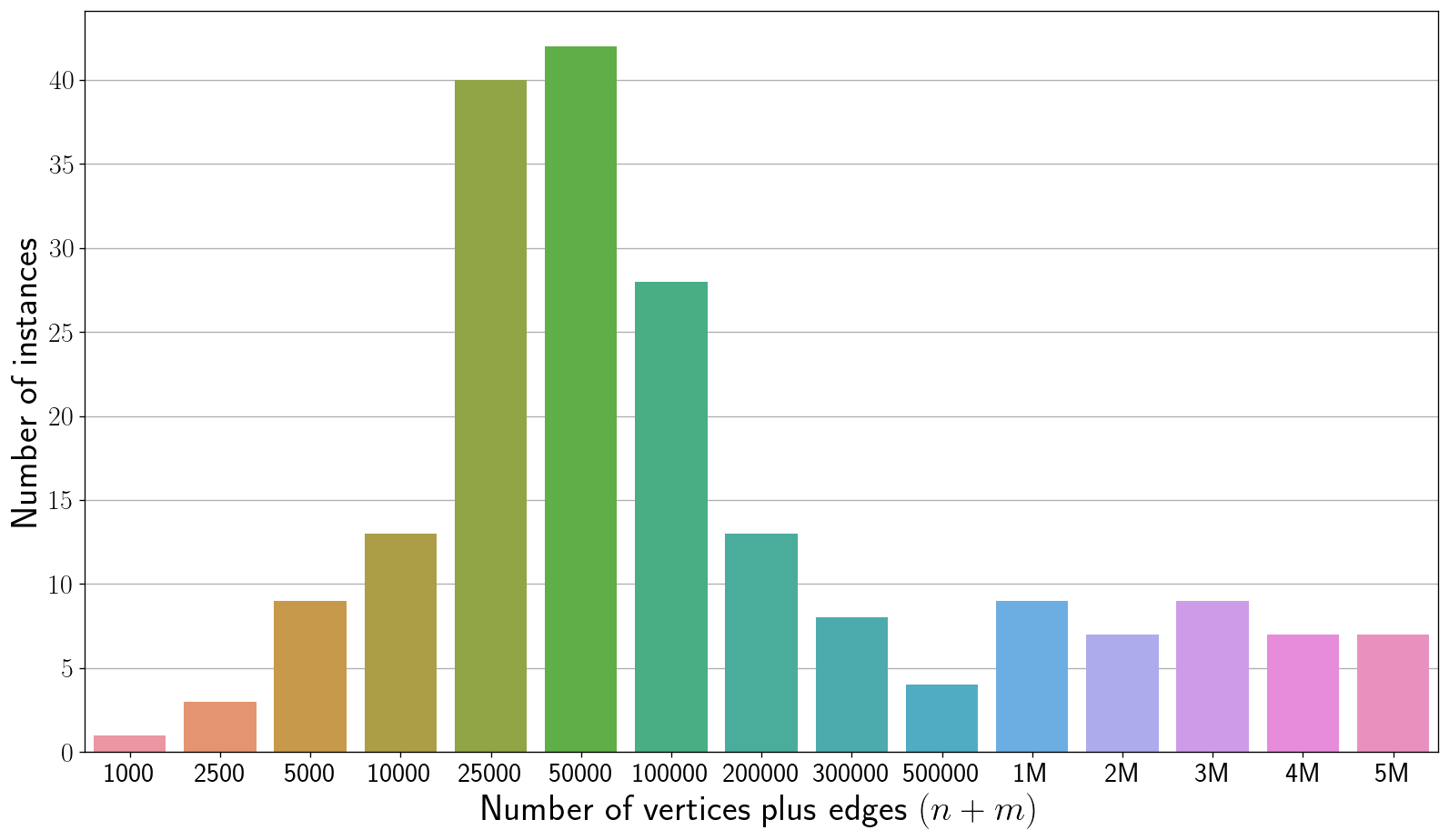 Kernelization is an important and vibrant field within parameterized algorithmics (see also a recent book on kernelization). Formally, kernelization is defined for decision problems: A kernelization algorithm (or kernel for short) is a polynomial-time algorithm that, given an instance $(G, k)$ of Cluster Editing, returns an equivalent Cluster Editing instance $(G’, k’)$ such that $k’ \le f(k)$ for some computable function $f$. Here, two instances $(G,k)$ and $(G’,k’)$ are said to be equivalent if $(G,k)$ is a yes-instance $\iff$ $(G’,k’)$ is a yes-instance.

Note that there are a list of issues appearing when we want to apply this concept in practice or in a programming contest:

The solution to issue 1 is relatively easy (and probably undisputed): For an input graph $G$ one returns a number $d$ and a graph $G’$ such that $\mathrm{opt}(G) = \mathrm{opt}(G’) + d$. Our solution for the other issue is probably a bit controversial (if you have better ideas, please contact us). To address issue 2, we added the requirement that any submission has to be able to create a solution for the input graph given a (not necessarily optimal) solution for the returned kernel. Thus, we make the kernelization algorithms of the submissions attractive for people who would like to solve Cluster Editing in practice: the kernelization algorithms can be combined with any other solver computing some cluster editing set without much overhead work. However, we realize that this is an additional requirement on the submission, thus increasing the bar for entering the contest. Moreover, we might exclude existing kernelization algorithms that can only work with optimal solutions. Overall, we hope that our decision will make our beautiful (and so far very theoretical) kernelization community more accessible to the more practical communities.